On 16th December 2021 His Grace Revatinandan prabhu passed away in Honolulu after a short illness which was diagnosed as lymph cancer. He joined ISKCON in San Francisco in 1969 at the age of 23. That very same year he moved to Los Angeles to open a temple there. In 1971, Revatinandana helped Srila Prabhupada establish ISKCON across India. In 1972 he was mainly based in the UK, and Srila Prabhupada personally encouraged his pioneer preaching work there 1972-1974.
Srila Prabhupada also personally recognised him as an excellent cook and writer. 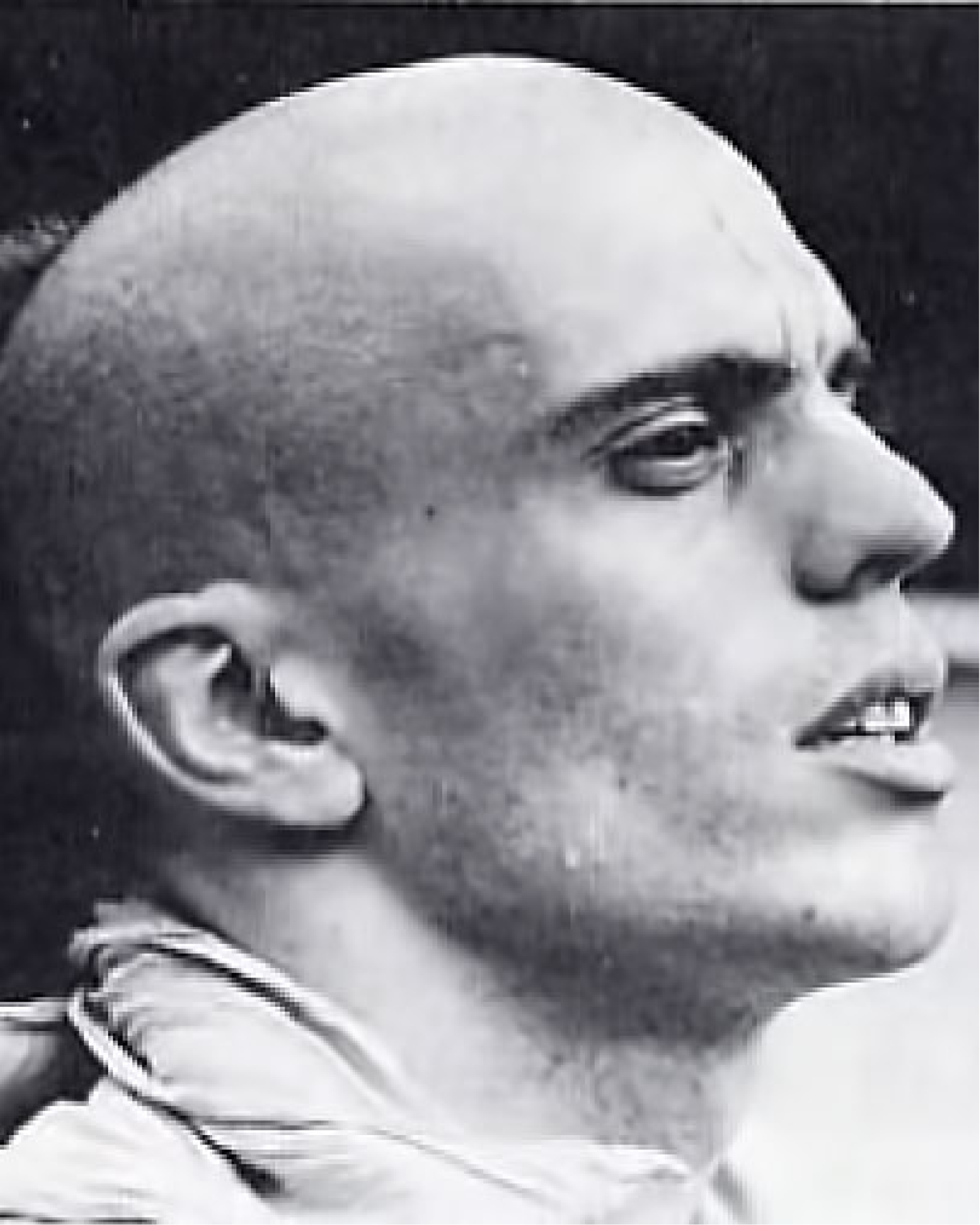 By Kunkuma Devi Dasi:
It’s with a heavy heart and blessings from his family that I want to tell everyone that last night December 16 at 11:45pm Hawaii time His Grace Revatinandan ( former Swami) passed away in Honolulu after a short illness which was diagnosed as lymph cancer. He was my partner for 5 years about 6 years after having been married to his first wife Pushpanjali Dasi and having a child Nila Chala Chandra das. He was first cousin to Vishnujana Swami who brought him to ISKCON in 1968. He has been living as a recluse alone many years on the south part of the island of Hawaii. His first wife was in touch with him and helped him through the last days. They were reluctant to send him to hospital but had no choice. His son Nila was on a telemedicine tv as he passed. So he was not alone. When Srila Prabhupada awarded him sannyas Prabhupada said, “ if you don’t succeed as sannyas then find yourself a good wife.”
As per the request from the family of Revatinandan das who passed on December 16 in Honolulu, they asked for this quote in his memory  “He reasons ill who tells that Vaisnavas die When thou art living still in sound! The Vaisnavas die to live, and living try To spread the holy name around!” (Bhaktivinode Thakur)

Opened His First Temple After a Year in The Movement At Age 23:
Revantinandana Maharaj joined ISKCON in San Francisco in 1969 and came to L.A. that same year. Tamal Krishna Goswami writes in his book, Servant of the Servant: “”As Śrīla Prabhupāda pushed forward his worldwide scheme, on a smaller scale we also continued to expand our activities. The map I had previously sent him indicated a number of likely places for establishing centers, and from these we selected Santa Barbara as the next suitable place. Like Laguna Beach, many young people were residing there, and in addition, there was a large university. I decided to send Revatinandana däsa to locate a suitable place for establishing a center, as he had proven himself as one of the most enthusiastic preachers of our sankirtana party.””
Thus, in 1969, after Revatinandana had been a devotee for about one year, he was sent to Santa Barbara, north of L.A., to open a temple.

Prabhupāda Encouraged Revatinandana’s Preaching in England 1972-1974
In April 1972, Prabhupada wrote him:
My dear Revatinandana,
Please accept my blessings. I beg to acknowledge receipt of your letter dated 3/10/72, and I am very much pleased upon you for taking up the matter of preaching work in England especially, and also other places. I am happy to hear that new centers are being opened by you and others in Europe.
[…]
I think your idea to canvass the youth groups and colleges in England is good proposal, so do it nicely in cooperation with Dayananda and the others there, and I am sending Kesava there to England soon to organize the book-distribution and travelling Sankirtana Party, so you know him, now you help him very seriously to increase these two programs, because I think especially that England is the best field in the world for distributing our books, as good or better than USA, so I want that you all should be very active to increase the scope there.

In December of 1972, Prabhupada wrote to Kishore:
Yes, I have seen the press articles sent by yourself and Revatinandana, and I am very thankful to Revatinandana also for giving you all nice boys and girls the right instruction.

Prabhupāda Asked Revantinandana to Chant On Beads For First Initiates
In 1973, Prabhupada wrote to Revatinandana Swami:
My Dear Revatinandana,
Please accept my blessings. Just now I have received some more requests for giving first initiation from Dhananjaya, and now I am receiving weekly not less than ten to fifteen such requests from new students. So it is becoming very expensive to send so many sets of beads such long distance, and it has become little bothersome for me also, so I think now you may be appointed by me to give first initiations to new disciples by chanting on their beads on my behalf.

Revatinandana Was a Good Writer
Later in 1973, Prabhupada wrote to Revantinandana in response to an article he had written:
My dear Revatinandana,
Please accept my blessings. I am in due receipt of your letter dated 29-5-73, and accompanying essay, and have noted the contents carefully.
Yes, your article is very nice. It is very important that we now expose the nonsense theories of these rascal scientists who assert that life comes from matter. They say that life comes from some chemicals, but they cannot say wherefrom these chemicals have come. Actually, if we examine carefully, chemicals are coming from life, not life from chemicals.

Revatinandana Was Famous as A Cook. Prabhupāda Encouraged Him to Write a Cookbook
In January 1974, Prabhupada wrote:
My dear Revatinandana Swami,
Please accept my blessings. I am in due receipt of your letter Jan. 4, 1974, with the enclosed cookbook.
I know you are a very good cook, and I can understand that you have found the books useful for distribution. I have no objection to your printing it with the name “”Revatinandana Swami’s Cookbook”, but the royalty should go to the Bhaktivedanta Book Trust. 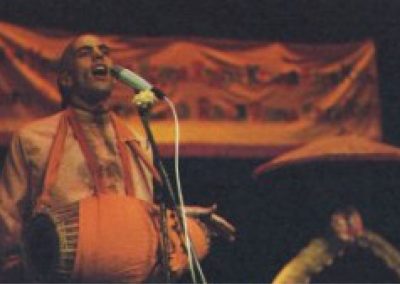 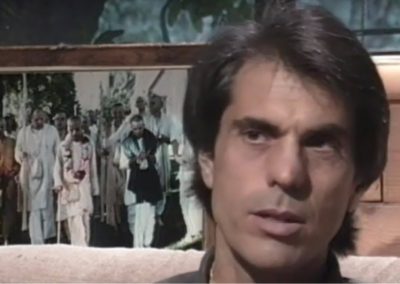 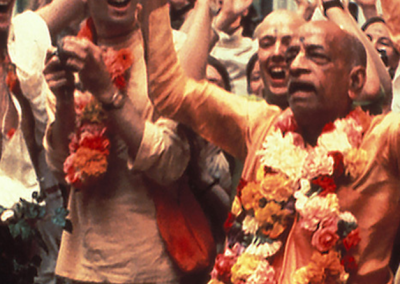 I remember his wonderful kirtans, strong preaching and his cooking. He was a big part of my early years in Krsna Consciousness. All glories to his service and may he continue on his auspicious journey with Srila Prabhupada’s grace and mercy.

I remember Revatinandan prabhu from Bury Place and he taught me how to cook many preparations. I still use his recipes for Tomato Chutney and Samosas! He was an amazing Kirtan leader and we were always ecstatic when he was leading aarti. He was present at my first initiation and I remember him with great affection.

I joined the ashram at Bhaktivedanta Manor just after Revatinandana (then Swami) had moved on from there to take up other services. So I was unfortunate to miss out on his association. However, what struck me then was the love, the affection and the admiration that so many of the devotees there had for this wonderful personality. He was cited for his kirtans, his preaching, his enthusiasm. And we had a set of sheets with his recipes from which I learnt to cook for the Deities.

I joined the Bury Place temple in 1972 and at that time Rebatinandana was the resident sannyasi. He had just returned from India as one of Prabhupadas original touring group. I was one of a few devotees with a drivers licence and I was always assigned to services where a driver was needed. I was asked to become his assistant and more than a year we travelled across the UK preaching in colleges. He was a very naturally accomplished public speaker, an expert kirtan leader and an amazing cook. After my year with Rebatinandana I had learned the basics of… Read more »

At a University programme, students were throwing their plates into the bin, with prasadam still on them. Though I was very young and shy, I felt so much distress at what the students were doing that I managed to ask Maharaj a question: ‘Aren’t we facilitating them making offences?’ Maharaj said, ‘Yes, but the advancement they have made by taking prasadam is greater than the offence.’ And I’ve never forgotten that all these years. I loved Maharaj’s free and easy manner, his self-confidence, his complete dedication to and taste for the process of Krishna Consciousness, his complicity with Srila Prabhupada.… Read more »