Priya Sakhi Dasi (Panna Rasiklal Mulji) lead a life of devotion to Krishna and selfless service. She was loved by everyone and was a prominent, and committed member of Bhaktivedanta Manor’s community where she used the bake cookies for Radharani’s bakery on a weekly basis, as well as lead the bakery tent at Janmastami. She rendered so much more unalloyed service for the pleasure of Sri Krishna and the devotees. Her presence in our community will sorely be missed, but her legacy of living a life of selfless service will continue as we celebrate her life. 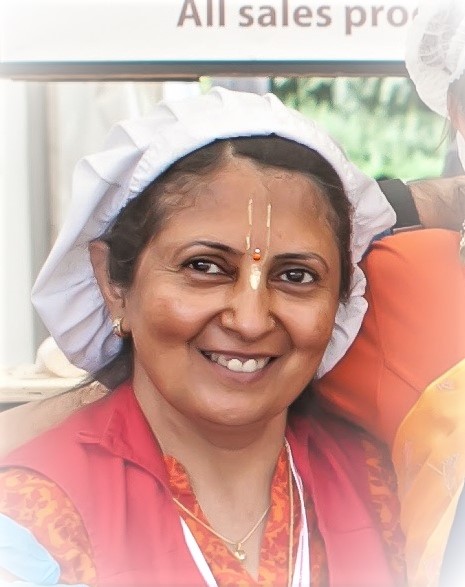 Priya Sakhi Dasi was born in Uganda, Kampala and moved to the UK in 1973. She married Raseshwar Das (Rasiklal Govindji Mulji) in 1981, and they had one daughter, Palvi. In 1996, Pallavi left her body at the tender age of 13. At this time, they were all residing in Kenya, Nairobi with the rest of the family. Thereafter they met the temple president of ISKCON Nairobi, Umapati Das. After informing him of Pallavi’s passing, the family wanted to start a food for life program in honour of Palvi. The food for life initiative started to become a daily occurrence, where they would distribute Prashad in different locations, centres and also have Kirtan.
In 1999, Raseshwar and Priya Sakhi, attended the Patrons trip to India where she became unwell during the trip and thereafter came to London.
They were already acquainted with Sruti Dharma Prabhu, and Prana Bandhu Prabhu before they moved to Kenya as Raseshwar Das was a member of the Patron Council for Bhaktivedanta Manor. Due to his involvement with ISKCON in Kenya, he took up Krishna Consciousness seriously in London and regularly visited Sruti Dharma Prabhu and Prana Bandhu Prabhu and as the relationship grew stronger, they both became close friends of the family.
In 1999, Raseshwar and Priya Sakhi both met HH Sivarama Swami, and decided to hold yearly Kirtans in memory of their daughter Palvi. The Holy Name weekend would start at home on a Saturday evening with Kirtan and Prashad, and would continue at the Bhaktivedanta Manor on Sunday. Over the years, this became a fixed festival for the Manor, and presently, the Holy Name Weekend is attended by 1000’s of devotees. This festival was taken up by both Raseshwar and Priya Sakhi with full devotion and commitment.
Over the last 21 years, both Raseshwar and Priya Sakhi have lived a life to selfless service and commitment. In anything Raseshwar does, he does with undivided determination, dedication and with a full heart, whether it comes to serving Bhaktivedanta Manor, serving the family or serving the family business. His level of commitment is exemplary and admirable.
She took her spiritual life seriously, and over the years formed a special relationship with HH Sivarama Swami. Raseshwar and her were due to take initiation in the near future. By Guru and Gauranga’s grace, HH Sivarama Swami initiated Priya Sakhi two days before she left this world over the phone whilst she was in hospital. She was preparing for this day for many years and was very ready for it. However due to the circumstances, it didn’t happen in person, but by Krishna’s grace, HH Sivarama Swami so mercifully accepted her as his spiritual daughter. The initiation happened over the phone, with over 200 devotees present, including HH Bhakti Purusotuma Swami, HH Bhakti Charu Swami and many other exalted Vaishnavas. It was in that moment, she achieved her goal in her life. By Priya Sakhi’s mercy, even our dear Rasik took initiation on the same day and became Raseshwar Das as it was their dream to take initiation together.
The next day around 11pm we were told by the doctors that she doesn’t have many hours left. So at 11pm, the doctors allowed us to see her via a webcam, and the family and close friends chanted Kirtan, Japa and read scripture to her for 7 hours all throughout the night. HH Sivarama Swami joined us in the middle of the night and chanting the Brahma Samhita Prayers, Nrsinga Kavacha Prayers to her. It was most definitely a painful yet soothing experience to know that Priya Sakhi was receiving this much mercy.
At 4.30am, the family decided to show her a live stream of Bhaktivedanta Manor’s mangala arti. She took part in Mangala arti, Tulasi Puja and Deity greetings. Shortly after, about 10 minutes after deity greetings, she left this world on the auspicious day of Rama-Navami, with so many vaishanvas chanting for her and with her. She left peacefully, and gloriosuly.
Priya Sakhi was known to be a warm, kind hearted, and giving individual. She was loved by everyone. Her dedication to serve others was exemplary and consistent. Her compassionate nature left a deep impression on anyone she would meet, young or old. She had a beautiful smile and a charm that radiated from her, like a divine child, both pure and playful. Her company was delightful. She developed a special quality that of which keeping Krishna and her devotion to Krishna the centre of her life. She suffered many health challenges in her life, but she never appeared unhappy. She was always cheerful and happy. She suffered tragic loss in her life and continuous ill health, but she was always so joyful in Krishna’s service. That is what was most important to her. To serve. She was an example of what a true vaishnava should be like.
She was extremely selfless in nature, constantly giving time her and energy to her friends, family and community. Anytime someone would come to her house, she would have a whole table ready full of hot prashadam. She fed so many devotees and made so many devotees happy. Her favourite thing to do was to feed people no matter what hour of day it was. She never once thought about what she could gain from any situation, it was always about the other person, it was always about how she can serve better.
We will live celebrating her life, and hope to follow in her example.
Priya Sakhi Devi Dasi Ki Jai! 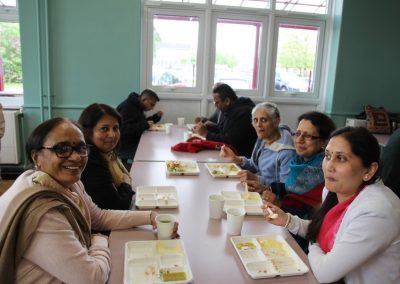 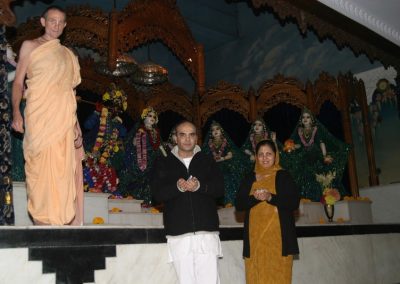 Visiting Mayapur on a Patron trip 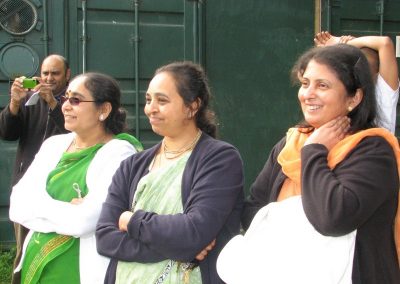 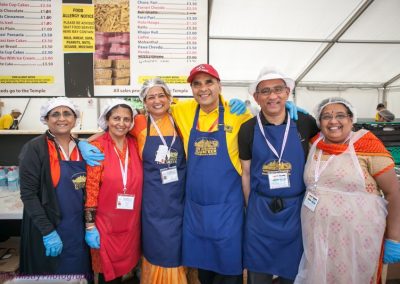 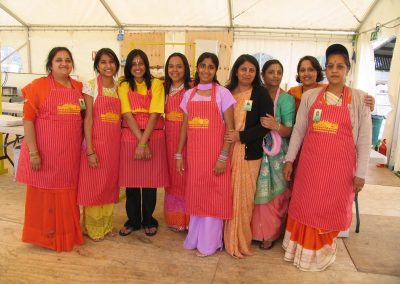 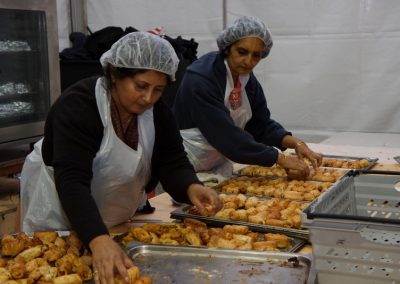 Panna Mulji Cooking for the devotees 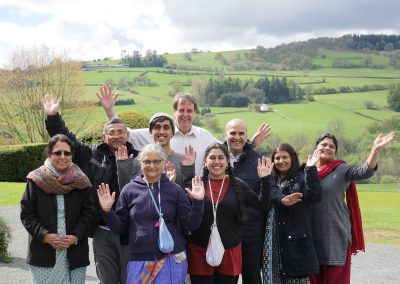 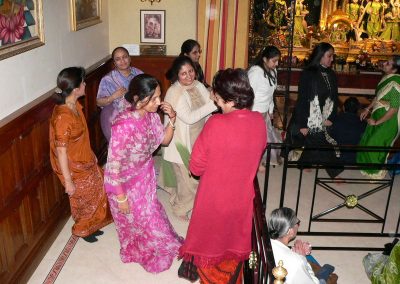