A very prominent and committed member of Bhaktivedanta Manor, whose extraordinary contribution of over 35 years of service spans throughout the UK, Europe and India. 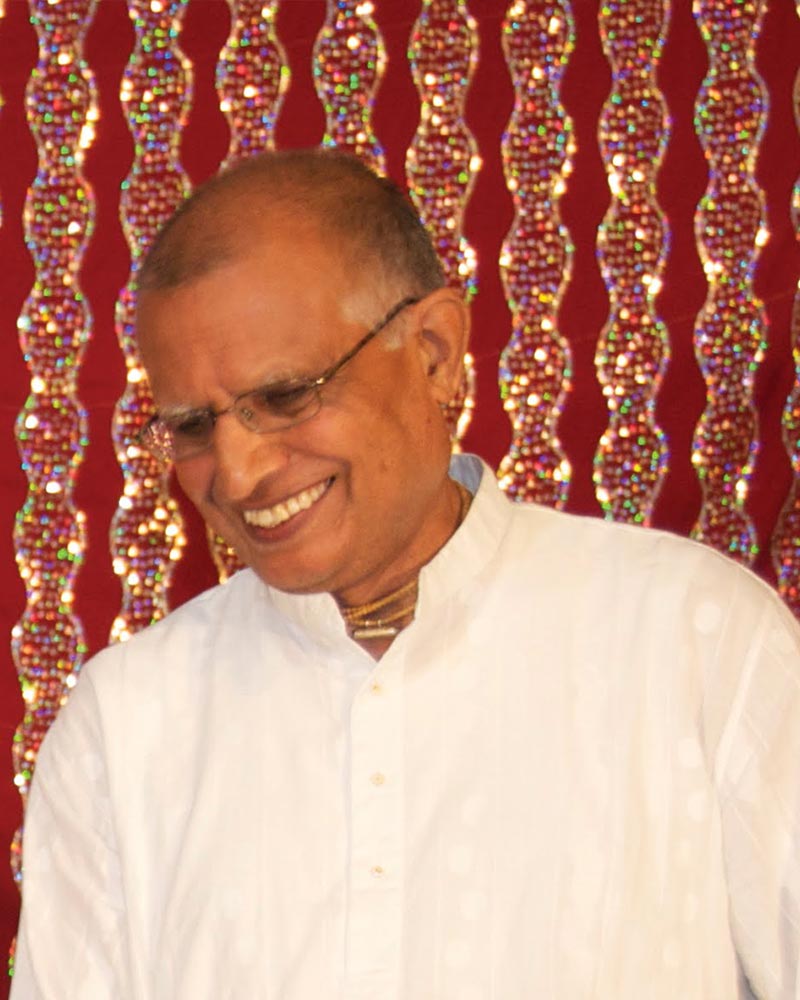 His extraordinary contribution of over 35 years of service spans throughout the UK, Europe and India. From the late 80’s his family started hosting the North London sangas. Attracted by the mission and feeling concern for the need to support Bhaktivedanta Manor, he became more committed. As a founding member of the Manor’s Patron Council, he along with other devotees found many other families to commit their financial support. During the late 80’s and early 90’s, the Manor was also gripped by the legal battle due to the threat of closure. Rameshvara das personally took on many risks in raising funds and was a key strategic advisor. The glorious victory of the Manor campaign in 1996 is testament of how he worked with and served tirelessly to get the desired result.

He supported the setting up of the Avanti Schools. He was founding Trustee of the I-Foundation and continued to serve by offering financial and strategic advice throughout the growth of Avanti’s seven faith and four non-denominational schools across the UK.

Rameshvara das was always available for sound property and financial advice to the ISKCON UK Management Council. He advised on the acquisition of the new temples in Dublin and Cardiff. In Leicester, Rameshvara had been integral in the purchase of the iconic Victorian building in the heart of the city. He also helped guide the devotees in Leicester to build their patron programme and he and other Manor colleagues arranged a substantial donation to undertake the renovation of the temple.

His ability to fight and take on big challenges attracted the attention of many senior devotees abroad. They invited his help and perspective on difficulties faced in their preaching fields. The early 90’s saw many challenges faced by the New Mayapur community in France. Rameshvara engaged not only himself but brought along colleagues from Bhaktivedanta Manor to support them.

He also supported projects in India: He was moved by the endeavours of Rupa Raghunatha das and lent his support to set up the Sandipani Muni Schools to serve the poor families of Vrindavan and offer not only meals but life changing education and opportunities.

Rameshvara das always served his spiritual master with attention and devotion. He supported many projects initiated by Bhakti Charu Swami, especially the building of the beautiful temple in Ujjain, which was built in record time.

In Sridham Mayapur, Rameshvara stepped in to help Bhakti Purusottama Swami to establish the local Bhaktivedanta National School. Recently, he sponsored schools in rural parts of Bengal and beyond. In serving those schools projects, he engaged many people from business friends to famous authors and clients of his.

Rameshvara had great humility and a strong work ethic. Despite his advancing age, would often be seen working hard in the kitchens of Bhaktivedanta Manor and encouraging the younger generations. There are also countless devotees he has helped on a personal level, ensuring they are engaged in service and compassionately ensuring that they were taken care of.

We salute a valiant soldier. We express our gratitude to a kind and warm-hearted father and husband. We offer our respects to the devotion of a dedicated disciple. We celebrate a life of unconditional devotional service. 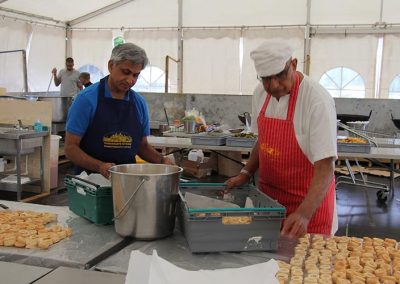 Serving in the festival kitchen 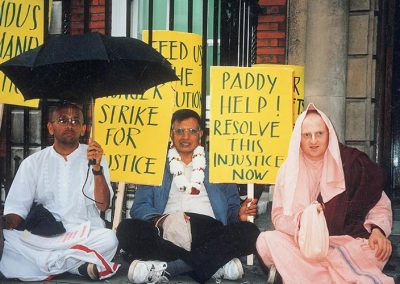 During the Manor’s campaign days 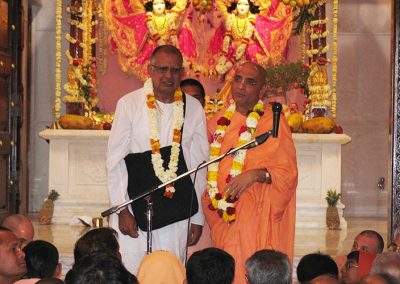 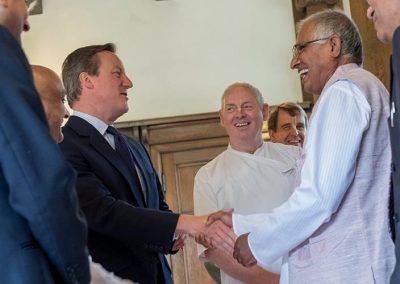 It is a terrible blow to lose the presence and association of another dear devotee friend. I have no doubt that Rameshwar’s passing has hit everyone very hard. And, it feels awful that we cannot be together as his family and friends to personally share our grief, memories and celebrations of his amazing life. But, I thank his family for this opportunity to offer a small and unworthy tribute to a personality that I treasured in many ways. Although not that much older than myself in years, I always regarded Rameshwar as a senior figure, as someone of my elders’… Read more »

In August of 2019, residents of New Mayapur told me how grateful they were that devotees from Bhaktivedanta Manor, headed by Rameshwar Prabhu, had collected a significant amount of money to repair New Mayapur castle’s roof, which had been leaking. A week or two later I was walking around the Janmastami preparation tents on the Manor grounds when I had the good fortune to meet Rameshwar Prabhu for the first time. He, along with a large team of other volunteers, was deeply engrossed in Janmastami cooking. I told him how grateful the New Mayapur residents were for his donations for… Read more »

Rameshwar prabhu devoted his life and his field of expertise for the benefit of Bhaktivedanta Manor and ISKCON as a whole. He was a generous, skilled and humble devotee who was greatly respected by many. As well as taking responsibilities on many ‘high-ended’ projects, he still had the humility and energy to volunteer for the Manor’s kitchens and always had a very positive and encouraging mood, carrying much friendliness and sense of humour too.

Rameshwar Prabhu, a Devotee Warrior By Praghosa Das Rameshwara Prabhu was a devotee who lived in London near the Manor. He is a disciple of Bhakti Charu Maharaja and he passed away early this morning UK time as a result of the coronavirus, he’ll be sorely missed not least by his dear wife Krishangi dd and family. His Grace Rameshvara Prabhu was a soldier, a valiant warrior for Srila Prabhupada’s ISKCON. He never saw a challenge that was too difficult to contend with and always fought until he could offer victory to Srila Prabhupada. He left this world with the very same fighting… Read more »

Ramesh, my brother was a pillar of the family. He was always there for us to help with anything.
We miss him so much. May his soul rest in peace.
Om Shanti
Om Shanti

Hare Krishna, Dandavats! All glories to Srila Prabhupada! All glories to Gurumaharaja! All glories to the stalwart devotee HG Ramesvar prabhu. I met him during BCS retreat in Malaga and last time in physical presence at New Mayapur retreat in France together with his good wife HG Krishangi mataji. There we had chat about service to the New Mayapur Iskcon project which was dear to Gurumaharaja and for him. Always eager to serve and especially inspire others to devotional service. At present this fallen servant is in Sri Radhakund dhaam, India (family matter related) and will definitely pray to Sri… Read more »

We are a part of His Grace Rameshwar Prabhu Ji’s mercy, in the from of Sunday cooking and Festival Donations. In the Bhagavad Gita 3.13 Lord Sri Krishna Explains “The devotees of the Lord are released from all kinds of sins because they eat food which is offered ﬁrst for sacrifice. Others, who prepare food for personal sense enjoyment, verily eat only sin.”. In the Purport to the above verse His Divine Grace Srila Prahupada explains that devotees are “Saints” as they love to cook and offer to Sri Krishna. Srila Prahupada then quotes the famous verse from Bhramha Samhita… Read more »

A gentle giant, who in his lifetime improved the lives of 100,000’s, while never seeking fame. I’ll forever remember his smiling face with bright eyes cooking in the Manor kitchen. Rameshwar’s legacy of selfless service continues to enthuse.

Rameshwar Prabhu I just feel like I am too small to say anything about Prabhuji, He was part of our Sunday Cooking Team, or shall I say We were part of his Team ..it was always amazing to see him working so hard during Cooking seva , doing all the manual Jobs and strength he used to show . He always made sure that Everyone is looked after and took care of all the problems during those 4-5 hours of Seva. He was always positive and encouraging everyone to do their best. one does not have enough words for Prabhuji’s… Read more »

He exuded love, compassion, common sense. He was selfless and generous in every sense to all he met and saw no bad in anyone. He was a true lifelong friend, guru, and an energetic devotee of the HKC. He was/is simply irreplaceable.