Devakanya mataji was known as a very strong and determined devotee. She completely dedicated the latter years of her life to Krishna consciousness and was devoted to her spiritual master. Naturally austere, she had excellent sadhana (spiritual practice)  and loved going on pilgrimage. Indeed, nothing could stop her serving at the Temple or travelling to holy places, regardless of the circumstances. 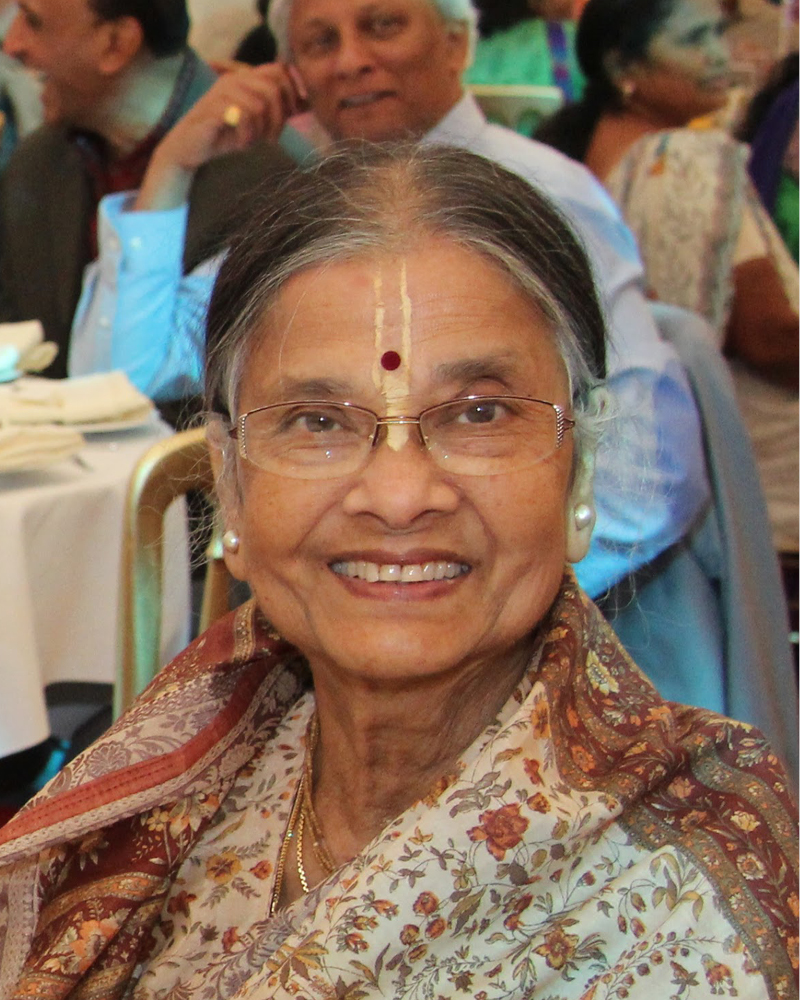 Devakanya mataji was born near Kolkata in India. She was raised by her father and her sister, as she lost her mother at birth. Growing up without a mother was not an easy journey for her. Her father named her Dipali.

After finishing her schooling, she wanted to train as a nurse for her future career. She joined a hospital in Kolkata for her training. After she completed her training, she worked as a staff nurse at the same hospital until she got married. Soon after that, Devakanya mataji came to London with her husband. She worked in North London Chase Farm hospital until she retired.

She came to Krishna consciousness in 1995, at a mature age. She was part of a sanga group, where the Bhagavad-gita was read once a week by a prabhu from the Gaudiya Math, who later introduced her to ISKCON.

Devakanya mataji started going to the ISKCON-London and Bhaktivedanta Manor temples on a regular basis. She became very sincere about her spiritual life. Soon she was aspiring for His Holiness Bhakti Caru Swami and then took diksa initiation from him. She served her spiritual master with devotion and commitment till her last day.

As a devotee, what stood out was her simplicity, humility and commitment. She led an austere life, eating and sleeping very little. She walked Vrajamandala Parikrama in India twice after her 70th birthday. With her husband, she went on the arduous Chardham Yatra when she was about 75. The amazing thing is that she walked all the way up!. As some of you know it can be a tough journey but she was a determined lady. If she makes up her mind she will go ahead and do it.

In about 2007 she unfortunately had an accident in Vrindavan, India. Her head was badly injured and she was in hospital for some time. One day I called her when she was recovering at her sister’s in Kolkata. After talking to her for a few minutes she explained she wanted to return home to the UK. I tried to convince her to take it easy due to the extent of her injury. She kept on telling me she wanted to come back so she could continue with her service. This is the amount of service attitude she had!

After arriving back in England she started visiting Bhaktivedanta Manor again and wanted to start her service again straight away. However, due to her ill health we had to say no. Close friends and devotees told her to sit in the temple room and absorb herself in kirtan and class. Would she listen? No. She started going to the kitchen on Sundays to roll puris again. She wanted to perform service in any situation, she didn’t worry about her health. As long as she could do something for Krishna she was happy.

Even at her advanced age she used to fast till midnight on Sri Krishna Janmashtami. She would want to perform abhishek and only after that, break her fast. In May 2018 we drove to Birmingham for the Holy Name Weekend. Devakanya mataji didn’t drink or eat that day until lunch time. She sat for kirtan and listened attentively the whole time. Throughout the trip she kept on chanting without any distraction, no talking.

After her accident in Vrindavan her friends advised she shouldn’t travel so much as her health had taken its toll. But every time she went to India she wanted to visit many places of pilgrimage rather than remaining in one place. She knew some of us would get upset at her for travelling so much, so she stopped telling us she was going away. She would tell us after she had returned from pilgrimage.

On a daily basis she wouldn’t eat until she had finished her chanting and puja. That meant she never had breakfast and didn’t eat until lunchtime.

In September 2018, Devakanya mataji wanted to attend Bhakti Caru Swami’s Vyas puja in Ujjain. Because of her advanced age and health issues, she was advised not to travel but she was determined to hear from her Gurumaharaj, such was her dedication to her spiritual master. She was travelling on the day of Nandostav and fasted until she reached Mumbai. As she came out of the plane she collapsed in a wheelchair. She was taken to hospital by ambulance and entered into a coma. During this time Radha dasi from Manor was also visiting Mumbai. Radha dasi contacted Bhakti Caru Swami, informing Him that Devakanya mataji was about to leave her body. He was able to speak directly to Devakanya mataji.

Devakanya mataji was then transferred to Bhaktivedanta Hospital near Mumbai to spend her final days. She wanted to leave her body in India and the Lord arranged to fulfil this desire. Radha dasi and her only daughter who travelled from Ireland with her husband were by her bedside. Radha dasi prepared Devakanya mataji’s body for her final journey. She had Radha Kund water, Ganga jal, Vrajaraj, Tulsi garland from the Radha Gopinath temple, Maha garland from Vrindavan and tilaks put on twelve places of her body.

In the divine surroundings of Bhaktivedanta Hospital, which is also a temple because deities reside there to give darshan, Devakanya mataji left peacefully in the afternoon on 8th September, 2018. 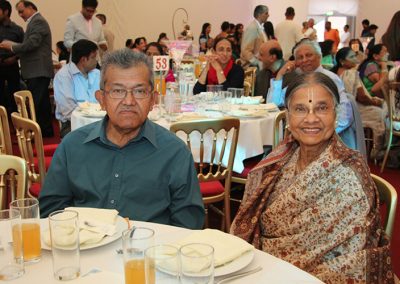 With her husband at Patron Dinner 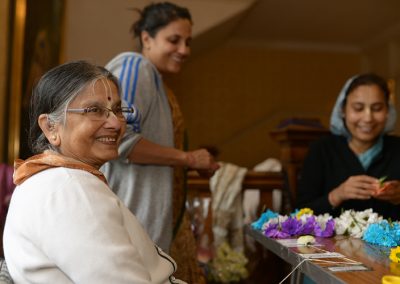 Made garlands every Saturday 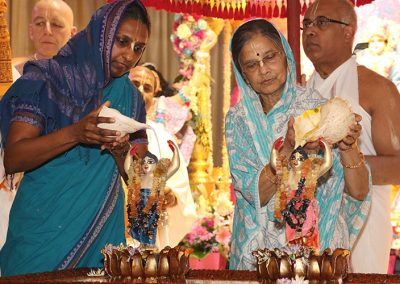 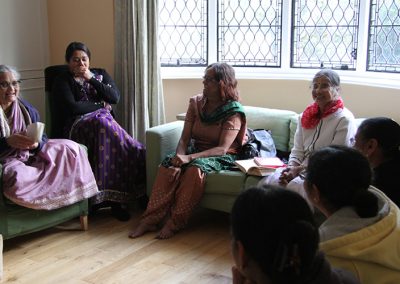 With her Mentee Group 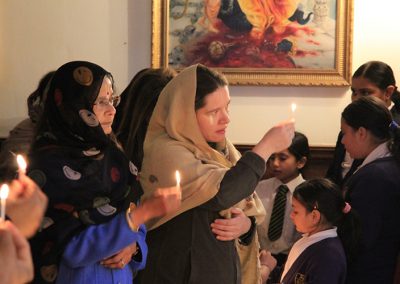 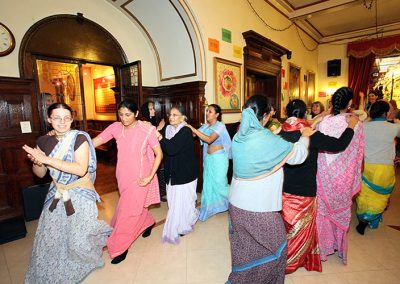 She Loved Dancing in Kirtan 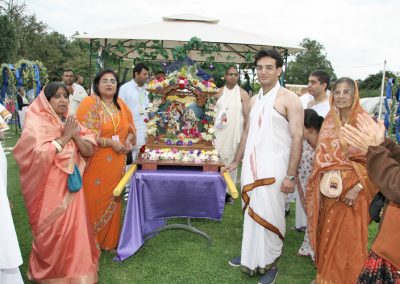 In The japa area at Janmashtami 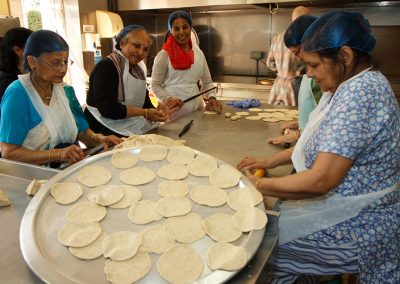 Making Puris in the kitchen

Missing her sweet smile and kindness. I am sure Krishna is ecstatic to have her home with him though! ♥️