Vrajanath prabhu passed away on 11th October 2017 in Sri Vrindavan Dham during the auspicious month of Kartik. Vrajanath, a long standing devotee for over 38 years, was a pujari to their Lordships and spent years tending to Krishna’s gardens at the Manor.

Vrajanath das was born in Eldoret-Kenya in 1948 and moved to England, UK in 1967. He married in 1968 to HG Lilashakti dd and they had three children – Sanjay, Dipa and Rishi.

In 1976 Vrajanath and the family heard that HDG Srla Prabhupada was coming to London and decided to come to Bhaktivedanta Manor to take his darshan, alas they did not find the temple on that occasion – definitely pre satnav era!

From 1979 the family regularly attended the Manor and over the years many devotees would frequent their home with Vrajanath relishing their association. In 1983 Vrajanth took first initiation from HG Bhagawan das and second initiation from HH Krsnadas Swami became a stalwart devotee for over 38 years. In the last few years of his life he took shelter of HH Chandramauli Swami.

Throughout the long “Save the Temple” campaign Vrajanath worked tirelessly to prevent the Manor from closure. Vrajanath fully engaged himself and his family utilising every ounce of spare time he could find to the campaign until the reprieve was achieved – this obviously took over his life and drew him deeper in Krsna Consciousness.

During the campaign and throughout the 90s Vrajanath, along with his wife Lilashakti dd, took care of the Sunday Feast service every week and he became the Halawa expert. Around this time, Vrajanth also became a pujari serving Radha Gokulananda, Sita Ram Laxman Hanuman and Gaur Nitai deities at Bhaktivedanta Manor until his departure.

Vrajanath was a man of intense commitment and extremely hard working, cherishing his service to Lord Krsna and devotees with genuine happiness, sweetness, enthusiasm and love. He was a man of impeccable character and devoid of any desire or motivation for power, fame or position.

In 2003 Vrajanath was diagnosed with heart disease and life threatening triple by-pass surgery. Doctors had practically given up on him due to excessive internal bleeding, however, miraculously he survived. Vrajanth always referred to this as Krsna’s mercy that he has been given additional time to focus on his sadhana and give Krsna Consciousness to others. Vrajanth further described this episode as a wake-up call and had spiritual experiences whilst in and out of consciousness that lead him to retire and dedicate his life further to Krsna Consciousness.

Vrajanath, always ready to serve, became engaged in gardening at the Manor. Regardless of any prestigious events he would be seen in his gardening gear and gloves going about his service. He firmly believed his strength, resolve and Maya armour came from putting his service and sadhana first and foremost. He would always complete his rounds before sunrise yet would continually be chanting or rendering some service to Krsna or devotees during the day.

Over the last 15 years of his life he frequented Mayapur, Vrindavan and many holy places of pilgrimage in India. For 2-4 months a year he would spend time in the dhams further deepening his spiritual life and living simply.

Throughout his life, Vrajanth helped countless people giving them spiritual guidance and engaging them in service. He always had kind words, spiritual outlook and time that inspired young and old alike. Vrjanath’s genuine humility and gentle demeanour was his most beautiful quality. He really was a friend to all seeing the true wealth of a person from within.

Vrajanath was the spiritual strength and guide to his family. He made it a point to constantly tell them to live by what he believed to be the three most important mottos in life;

During Kartik 2017 Vrajanath and Lilashakti had travelled to Badrinath and then to their annual pilgrimage to Vrindavana. Several days later he became unwell and experienced shortness of breath. He peacefully passed away at the Rama Krishna Mission on the morning of 11th October 2017. Just before he passed away he folded his hands and smiled brightly. He was transferred to Bhaktivedanta Hospice for 3 days prior to the funeral. It was Vrajanth’s immense good fortune that his passing, resting place and cremation was all within the Rasastali area of Vrindavan. Krishna arranged for him to leave his body in such an auspicious manner.

Vrajanath’s funeral took place on 15th October 2017 which was on the auspicious day of Rama Ekadashi. He was carried on a beautifully decorated bullock cart from Bhaktivedanta Hospice for final rites at Keshi Ghat. The blessings continued with Vrajanath receiving garlands from Krsna Balaram temple and the 6 Goswami temples plus the mud from Kankan Kund (Radha Kund) upon his chest.

The funeral procession stretched back over a kilometre with many devotees and local Brijwasi joining in and giving their blessings and prayers. Despite the situation it was not a morose and somber mood but rather that of a joyous celebration. Truly a glorious departure by Krsna’s arrangement for an incredibly unassuming devotee.

For the two weeks following his funeral, there were many feasts, kirtans, feeding of cows and reading of Srimad Bhagavatam at various temples in Vrindavan namely; Krishna Balaram Temple, Radha Raman, Madan Mohan and Radha Damodara. It felt like a joyous festival.

Vrajanath epitomised the character and qualities of a true vaishnava – a life of dedication and devotion to Krishna and his devotees. He has left a wonderful legacy for all to follow. 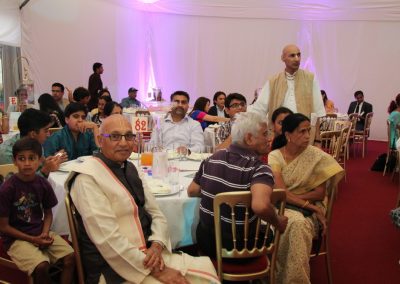 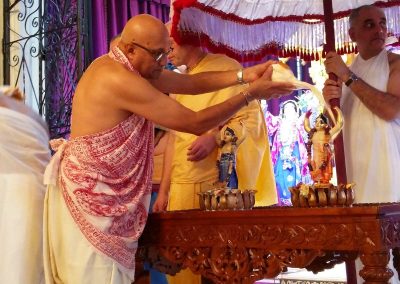 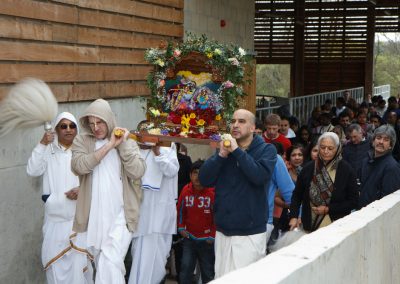 Procession with the deities 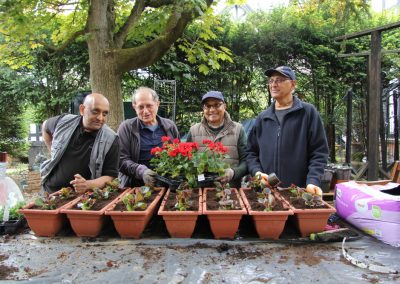 With his gardening team

Vrajanath’s association with our family started with his son Rishi and my son Parath when they were at Manor’s youth camp out together.
Thereafter, Vrajanath joined Hare Krishna Temple Defense Movement (HKTDM) and volunteered in our campaign to save the temple.
Vrajanath and Lila Shakti Ben visited us in Southern California about 10 years ago and we all really enjoyed it.
I pray for the departed soul to rest in peace.
I miss him very much!