A quiet, kind, multi-talented devotee who was loved and respected by many. 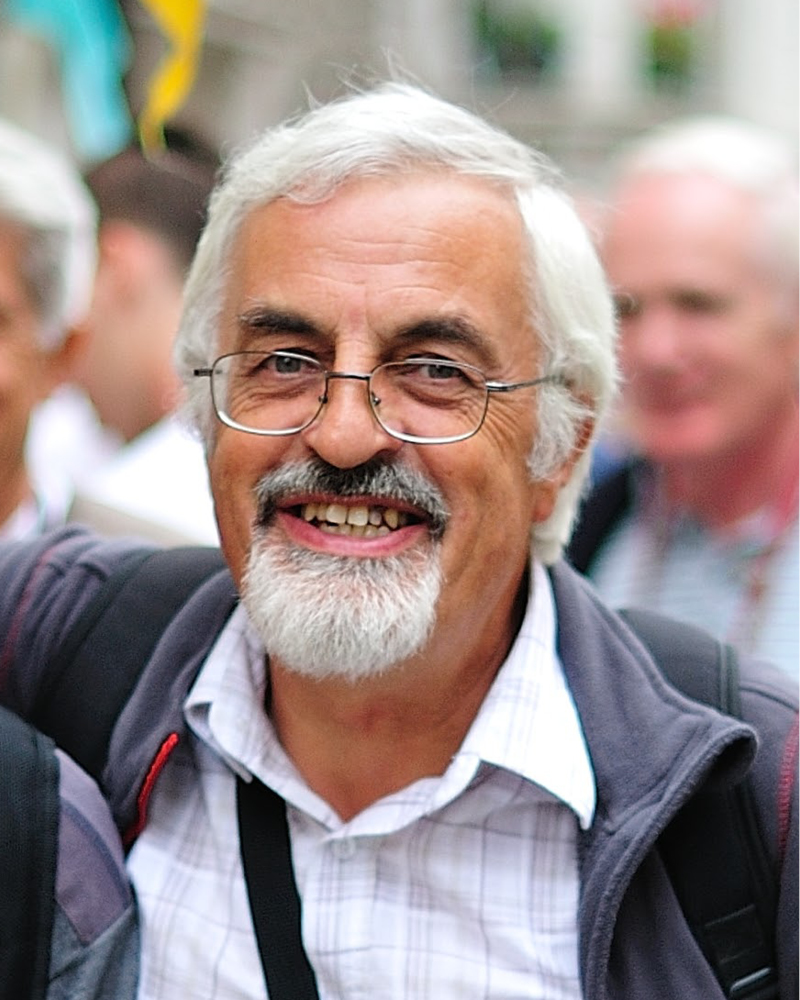 Mohan Prabhu was born as Michael Willard Gulley on 2nd April 1950, in Urmston, Manchester to Florence and Jay Gulley. He had two elder sisters – Florence and Tina (Christina). His parents separated and Mohan remembers a stepfather he did not connect well with.

He was always fascinated in how things worked, and as a child his treasured possession was a crystal radio system that he built from a kit. After he left school, he did an electronics course and gained a qualification in tv and electronic repairs. He did various jobs throughout his teenage years, but never found a strong connection with any of them. As was often the case in the late 60’s, he began experimenting with drugs and hung out with students from a local art college. He grew his hair long and became even more disinterested in joining mainstream society.

Then one day he met a devotee, distributing books and magazines in the streets of Manchester. That devotee invited him to the Sunday feast programme at the temple there. He found the book difficult to understand but went to visit the temple……….. there he became enamoured with the prasadam and the chanting. He recalled that he used to jog about 5 miles to the temple each Sunday, chanting Hare Krishna with each step he took. His first mentors were Tribuvanath and Ranchor Prabhu – who he always remembered fondly, as very kind personalities who took time to help him and care for him in his early days as an aspiring devotee.

Soon he was sent to Edinburgh where a few devotees were starting a preaching centre. Money was scarce and it was very austere in those early days, but there was a special camaraderie amongst the devotees, that became like a loving family for him. He remembered Rama Devi and Jagaddhatri from those early days in Scotland, who were just young girls visiting the temple. Srila Prabhupada came to visit, and the devotees organized a successful public programme for His Divine Grace, which was well attended.

In 1972 devotees acquired the Bhaktivedanta Manor, donated by George Harrison of the Beatles. Mohan had been noted for his knack of bring able to fix things and was called down to London to join that very early team of devotees to convert Piggots Manor into Bhaktivedanta Manor, temple and ashram. They struggled in those early days with just a handful of devotees but their enthusiasm and dedication to Srila Prabhupada’s mission was strong. Mohan proved himself to be a “jack of all trades” and he soon took on the role of maintenance man at the manor, turning his capable hands to whatever task was needed – rewiring the temple room, dealing with the plumbing, repairs to the roof, taking care of the temple cars, cleaning and clearing the lake in the grounds – he just saw what needed to be done – and got on with it, gaining more and more practical skills along the way.

One of his favourite tasks was setting up the microphone system and recording Srila Prabhupada’s kirtans and lectures when he came to visit Bhaktivedanta Manor. Mohan would make several copies of these tapes and distribute them to devotees so they could listen over and over again to those treasured lectures.

He became part of a team of devotees, headed by Bhumadev Prabhu, who formed a drama troupe at the Manor, called CHIT – Chaitanya’s Instant Theatre. Sakshi Gopal, Sri Pati, Kishor, Srikama Devi dasi, Mahavidya, Parividya…. were all regular participants in this group. Every Sunday they would put on a production with stories from the Bhagavat Purana or contemporary skits. Mohan’s contribution was to put together the sound tracks with musical score, lighting and special effects – sitting on his raised dias at the back of the theatre room, with his gadgets, knobs and buttons for synchronizing the productions. He loved getting involved with the festivals at the Manor – building stages for Janmasthami, hiring out lighting rigs, amplifiers, microphones, designing back drops. Painstakingly planning the set up and clear up from beginning to end. He also assisted in the building of the Rathcarts and other paraphernalia for the London temples.

For several years he was married to Sangha devi dasi. Although they didn’t have any children together, Sangha had 2 offspring from a former marriage – Bala and Kishori – who were very young children when the two married. Mohan helped to bring them up till their teenage years.
Mohan lived for a few years at Chaitanya College in Worcester. Whilst there he created an elaborate sound proof room and purchased a lot of high tech recording equipment. Jaya Tirtha Prabhu had a vision to create good qualitity TV suitable for a devotee audience and to further expand the preaching work. But when Chaitanya College was disbanded, Mohan and several other devotees returned, somewhat disillusioned, to the shelter of the Manor. He eventually acquired a rented property in Boreham Wood and lived there for several years – keeping in touch with devotees but now working and maintaining himself.

In 2001 he came to live and work in Leicester, settling down with Janaki devi dasi and her 12 year old daughter. He became involved with the Leicester devotee community and once again began assisting with various aspects of maintenance work for the temple, setting up sound systems for festivals, creating sound tracks and recordings for dramas as well as creating a number of multimedia videos that he posted to Youtube. He became very interested in digital animation and spent many hours training himself to develop this art with a view to creating more and more dyamic preaching tools for the world wide web. He was dedicated to Srila Prabhupada and saw this as a valuable service he could offer to his beloved Guru Maharaj.

In 2016 he was diagnosed with a brain tumour and told that he had stage 4 cancer. The news was devastating. After several grueling MRI scans, he had surgery in Nottingham Queens Medical Centre to remove one of the tumours, but the operation left him practically paralysed down one side, needing intensive medical care. He began to question why Krishna would put him in such a difficult and desperate situation and went through a period I can only describe as “the dark night of the soul”. One night, whilst in the Leicester Royal Infirmary, he had an amazing experience – Srila Prabhupada appeared to him in the dead of the night and reassured Mohan prabhu that he was aware of all he was going through, not to worry and that it was all part of the Lord’s plan. Mohan was adamant that this was not a dream, but a visitation by his Guru Maharaj. He became very animated and excited – and after that, very peaceful and accepting of the whole situation he was undergoing. Srila Prabhupada gave him the courage to face this most difficult chapter of his life.

He didn’t like to remain in hospital and pushed to be discharged back home as soon as possible. In fact he came out of hospital and straight away joined in with the Rathayatra Festival in Leicester albeit in a wheelchair. With physiotherapy and sheer determination, he progressed so he could walk short distances with the use of a stick. In June 2017 he was determined to attend the London Rathayatra. Taking a coach from Leicester he completed the procession, then joined the Leicester coach for a final visit to Bhaktivedanta Manor, his spiritual home. After this trip, his condition took a turn for the worse and saw a rapid deterioration in the state of his health. He gradually became more and more unable to care for himself and would easily become tired. But he was peaceful and accepting, he showed no more fear or anxiety about his condition. Devotees would come home to visit him, chanting together, reading to him, bringing prasad and other holy items. On 19th August, 2017 he passed peacefully from this world, in the company of a handful of devotees, chanting the holy names of the Lord. He had made the transition from this world, to carry on his eternal service to Srila Prabhupada. As was his desire, his ashes were scattered in the grounds of Bhaktivedanta Manor, in an unmarked area near the little bridge to the right of the lake. A small portion of his ashes was taken to Mayapur and immersed in the Ganges with vedic hymns and rituals for the benefit of his eternal soul. 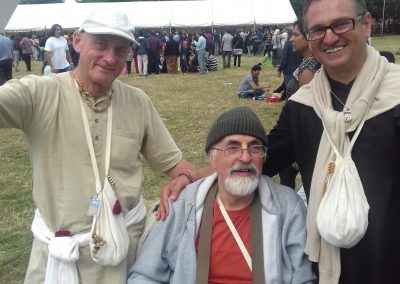 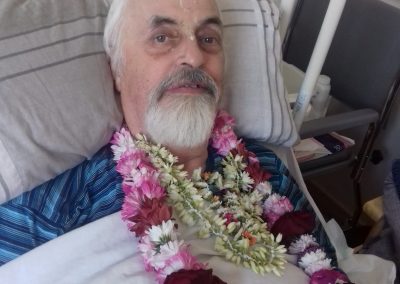 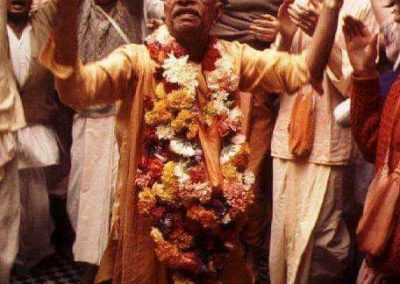 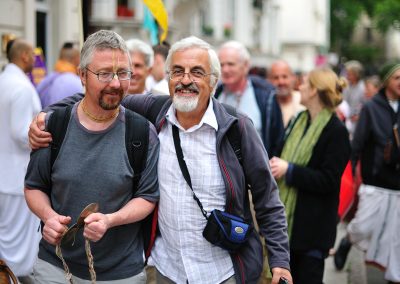 Beautiful picture of Srila Prabhupada and Mohan at Bhaktivedanta Manor.

Hare Krishna Dandavats and parnams to mohan prabhu. All glorious to srila prabhupada Such a gentle wonderful vaisnava. As mentioned in his biography about his involvement with chit drama I was honoured to also participate with mohan prabhu as a kid with the chit dramas in the 70s. He was always kind to me. As I took on duties of drama latter on in life mohan prabhu was always encouraging me in my service of drama.mohan formed my early happy and joyful years in my Krishna consciousness for which I am eternally forever grateful to him. I have to say… Read more »