From his early visits to Bhaktivedanta Manor in the late seventies and early eighties, Harivamsa Prabhu’s connection to Sri Sri Radha Gokulananda blossomed. He devoted extensive time to a variety of devotional service, above and beyond his family responsibilities.

His hospitality and kindness touched many hundreds of devotees, and he has been an unmissable part of the Manor’s festivals throughout the years. He served on the Manor’s Patrons Council and Festival Committee for many years, and together with his wife Krsnapurna dasi encouraged and mentored thousands of individuals in their Krishna conscious journeys. He could regularly be spotted managing the temple darshan queue and the Sunday car parks.

From its early days, Harivamsa Prabhu taught in the Manor’s Sunday School, (which later became Krishna Club) and assisted many devotees with eye care and optician services both in this country and in eye camps abroad. He offered substantial service for Jagannath’s Snana Yatra and Rathayatra festivals. Harivamsa Prabhu’s extensive service over the years will not be forgotten.

One of the early teachers at Krishna Club 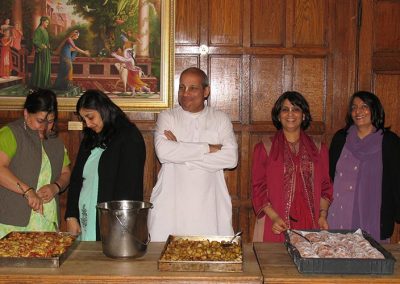 Serving Prasad (and having fun) 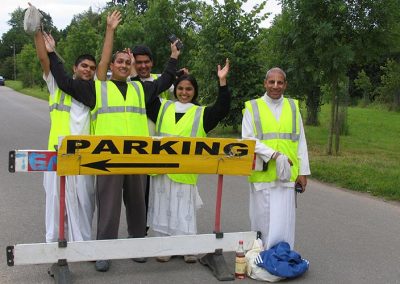 Harivamsa Prabhu’s Rathaytatra Service. It is with sadness that we received the news of the passing of Harivamsa Prabhu on Wednesday 9th of March. He has been a very dedicated devotee of Sri Sri Radha-Gokulananda at Bhaktivedanta Manor UK for many years. We will leave it to his close friends and mentors at the Manor to describe the glories of that service. But what many devotees may not be aware of, is that he also performed significant service to our London Lord Jagannatha. For the first time in 2001, we were able to hold the Snana Yatra of Lord Jagannatha… Read more »

POEM ON THE LIFE & PRECEPTS OF HG HARIVAMSHA PRABHUJI. You were given the name HARIVAMSHA You live the life of a PARAMAHAMSHA     We saw you as our FATHER (BABA) Arjun Dev saw you as his Grandfather (DADA)     You would throw him in the AIR And with affection pull his HAIR     May be we were SCARED But then we realised you CARED     You dedicated your complete LIFE Along with your good WIFE     Always serving OTHERS Never concerned about adding FEATHERS     You always loved to SHARE Because you really… Read more »

Hare Krishna Please accept my humble obeisances and all glories to Srila Prabhupada As you are all probably aware by now, his grace Harivamsa prabhu left his body early this morning surrounded by his family and close devotees. There is kirtans tonight at Bhaktivedanta Manor from 6pm. When I heard the news this morning I was filled deep sadness especially for his family, close friends & the many souls that have been fortunate to have been touched by the genuine affection and inspiration given by Harivamsa prabhu. His loss will be great too so many people. At the same time I guess you… Read more »

Dear Prabhus, Please accept my humble obeisances. All glories to Srila Prabhupada. We are completely taken by suprise, by Harivamsa’s sudden departure of this world at still quite a young age. He was such a nice devotee, strong and dedicated, sold out to Srila Prabhupada. I think that now Srila Prabhupada and Krsna have a greater service for him. For all of you, his family members,it will be a difficult time, a time to be brave though and carry on in devotional service. Naturally so many responsibilities are suddenly falling upon your shoulders. Krsna promises in the Gita that he will… Read more »

Dear Harivamsa Prabhu, I expected to see you when next in London. But you’ve suddenly left. You were planning to leave, but more gradually. Seeing that the time had come for you to retire, you’d moved close to the Manor, you were shifting the practice over to Vishaal, and you were looking forward to being still more absorbed in service. Your plans were all sensible and Krishna conscious. But Krishna had some other plan. So now we are missing your company. In the Isopanisad a devotee leaving this world prays to the Lord, “Please remember all that I have done for You.”… Read more »

My friends, Namste.   I and my wife were on one hand extremly sad on passing of our well wisher and friend; HG Harivamsa prabhuji. On other hand; I was happy that he had made the journey from this planet to Back to Godhead; Sri Goloka Vrindavan, an ultimate destination of vaishnava. I received a text message from Dilip ji at 4 am Arizona time; I was viewing a great epic movie in my mind how Harivamsa ji came in my life and made impact in my personal life. I used to call him; my Guru Maharaj.   I was searching how to glorify my friend. In my… Read more »

Hasmukh Kaka was our fun, always-smiling, ever-friendly and wonderful Kaka. He definitely lived up to his namesake. Throughout my childhood he always made an effort to take us out whether it be to the funfair, to see fireworks displays, wildlife parks or swimming. He helped to shape our childhood and make wonderful memories for my sisters and I. He always had treats and other goodies such as prasadam, cookies and other lovely items which he always shared with anyone he encountered. Ever the feeder (which his eldest son Vishaal has now adopted also)! I also had a long conversation with… Read more »

Hare Krishna Please accept our most humble obeisances. All glories to Srila Prabhupada. All glories to Guru Maharaja. It was a shock to us when we heard that Harivams Prabhu had passed away. He had touched our lives in so many ways. He always had our spiritual welfare in mind and how to benefit us. When we first went to Radhadesh he was with us. Harivams Prabhu showed us his kindness and care and from that time and we developed good rapport. He encouraged us in service and in so many aspects of our spiritual life and he also visited… Read more »

My thoughts for my uncle: https://youtu.be/1yQzdRmRGA8