Vicitravirya prabhu was one of the pioneers of ISKCON in the UK. A brilliant philospher, kirtan enthusiast with an angelic Welsh voice and an absolute gentleman who cared for all the devotees. 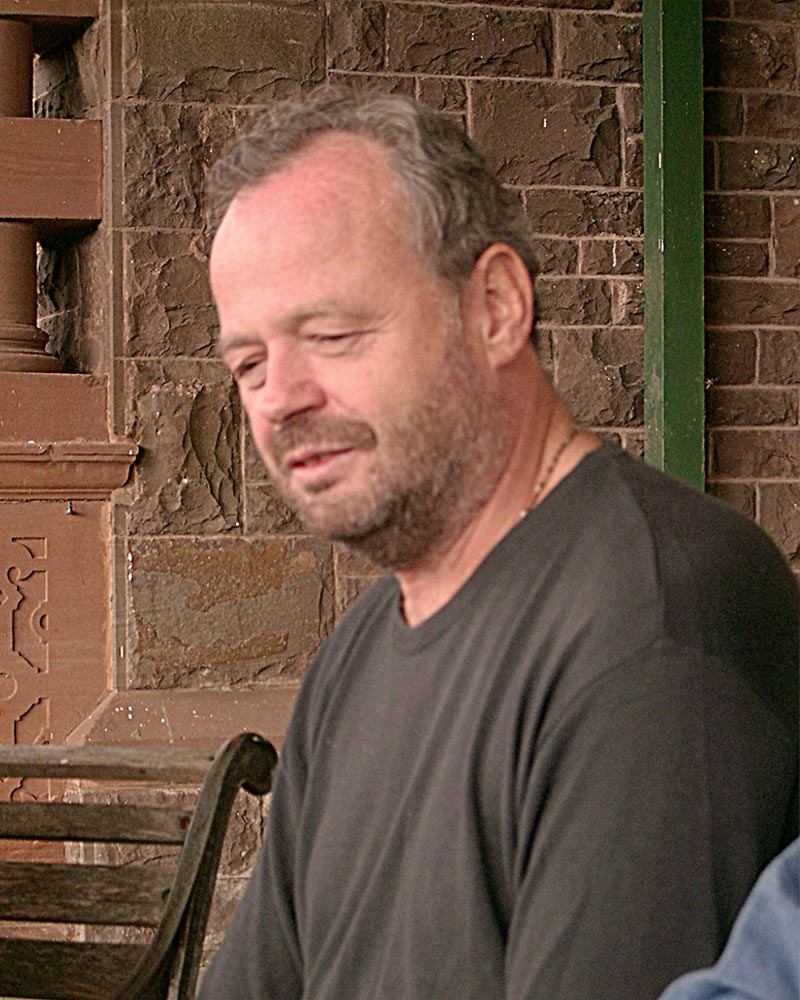 On 15th July 2010, Vicitravirya das, one of the most influential devotees of ISKCON in the UK passed away following eight years of a debilitating motor neuron disease.

Vici, as he was affectionately known, met the devotees in his home town of Cardiff, and by his influence, spread interest of Krishna consciousness amongst the local hippie community.

On joining the ashram in Bury Place, London, Vici quickly demonstrated his deep intelligence and management skills in helping the fledgeling movement become well established. It is safe to say that so much of the modern ISKCON movement that we take for granted in the UK is built on the vision and projects for which Vici provided a major contribution.

Vici led the defence of the Bury Place temple and the successful transition to the new site in Soho Street. He established a solid charitable and administrative structure to support a growing society. He was temple president at Bhaktivedanta Manor in 1977 and rendered important service to Srila Prabhupada during his final visit to England. He organised the growth of ISKCON UK under the twin tracks of book distribution and development of the Hindu congregation. Most people think that the campaign to save the Manor began in the mid-80s, but Vici had already had to fight the first enforcement notice issued by Hertsmere council in 1981. At that time he envisaged solving the Manor’s traffic issue with a new access road from Hilfield Lane.

He also negotiated the financing of the purchase of Chaitanya College. During the crisis that ensued following the departure of Jayatirtha in 1982, it was Vici who held the yatra together. Those devotees who served with him know just how much we all owe to this unassuming devotee. And, we all appreciated his wonderful gentlemanly qualities – considerate and caring of the devotees.

He also had a phenomenal voice and we loved hearing him singing bhajans or lost in the ecstasy of the holy names as he led often totally wild and mad kirtans.

In 1985 Vici moved from UK to become Temple President in Detroit, USA. Later he relocated his family to Florida to embark on a new business venture with a fellow devotee. This led him to being head-hunted and appointed a Vice-President and Financial Officer with the Hyatt hotel organisation.

In 2002, he was diagnosed with a terminal form of motor neuron disease with a prognosis of about 3-5 years. For the past 6 years, he has been in a wheelchair and cared for by his four children. A year ago, he returned to his native Wales. Although clearly aware of the slow unrelenting pout the progress of his disease, Vici never exhibited any regret, anger or frustration about his condition. Rather he felt more and more blessed to be in close relationship with his family and old devotee friends as well as being able to prepare himself for the final stage of his life.

Just days before he died, he revealed his spiritual insights: One day he remarked:- “When you get this close to death, you see that it is not what you thought it was. All our life we fear it, but when you are this close, you see that it is not the end; it is a portal, a portal of opportunities beckoning you. It is not something negative or destructive. Life is for learning lessons and death is our biggest weapon to learn the most important of all lessons; because it reveals the essence and purpose of our life.”

Vici passed away with his children and devotees around him and his favourite kirtan recording of Srila Prabhupada singing on the Happening album. He was cremated in Cardiff and on his request, his ashes were scattered by his children in a ceremony at Bhaktivedanta Manor. The devotees here arranged for a tree to be planted to commemorate the spot. That evening about 200 devotees gathered to offer tribute to this outstanding devote – one who did so much to build the foundations that have allowed all the programmes we now enjoy and benefit from were to grow and flourish.

Now that this soul, so dear to Srila Prabhupada, is free from his ailing material body, we feel sure that he has been able to continue his devotional service as part of the Lord’s eternal chanting party. 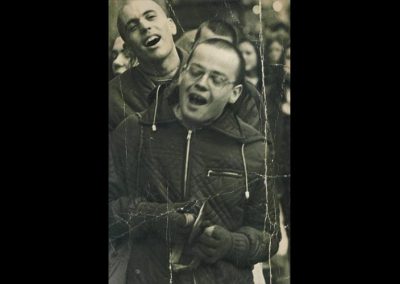 Out on Harinam in London 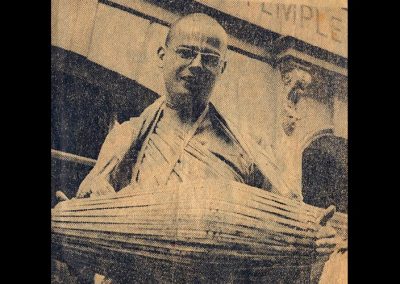 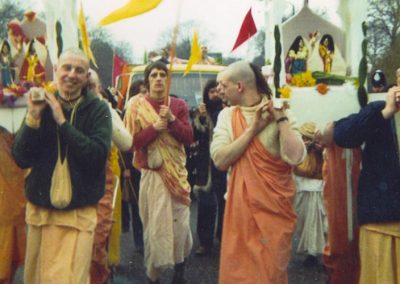 With palanquin on right 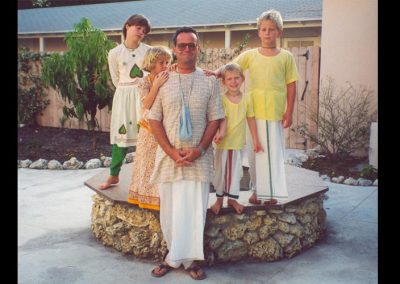