Ratnaranjini Dasi, A disciple of Srila Prabhupada, was considered the mother to all the devotees in Karuna Bhavan. She was always busy and happy in her service and others could feel that when associating with her. She was a good example of a sincere, simple devotee who always did the needful when asked.

Ratnaranjini Dasi was born in Edinburgh, Scotland. She and her husband met the devotees in 1973 in that same city, where ISKCON had a temple on Forrest Road. They moved to Bhaktivedanta Manor soon afterwards. Ratnaranjini Dasi was initiated by Srila Prabhupada the following year. Although by then she had a baby, she assisted Mukunda Goswami with typing and other office work for the Temple. Whatever service she took on, she was always reliable and steady. She was a wonderful mother and exemplary devotee. Her mood was “do the needful”.

Afterwards the family were asked to move from Bhaktivedanta Manor and take up preaching activities in South Africa, which they did. In those days grhastha (married) couples were often encouraged to go to other countries to help expand the preaching activities.

Upon their return they were sent to Glasgow, Scotland, and then on to Dublin, Ireland and after some time they returned to Bhaktivedanta Manor. By then Ratnaranjini Dasi had two children; Abhay Charan and Kunti. Her husband was engaged Community Preaching Programmes and meanwhile she began doing a lot of typing for the Mahabharata Times, a magazine which was mailed out to the community.
It was also her duty to clean Srila Prabhupada’s quarters. She liked this service very much as she said “it made her feel close to Srila Prabhupada”.

The family then moved to Chaitanya College in Worcestershire and eventually up to Lesmahagow, Scotland, where they opened a temple. Ratnaranjini Dasi was considered the mother to all the devotees there. She was always busy and happy in her service and others could feel that when associating with her. She was a good example of a sincere, simple devotee who always did the needful when asked.

She passed away from a brain tumor at the age of 44, in her room at the temple in Lesmahagow, surrounded by her family and devotees who were chanting.

Her life was all about “doing the needful” and was happy to serve anywhere she was needed. 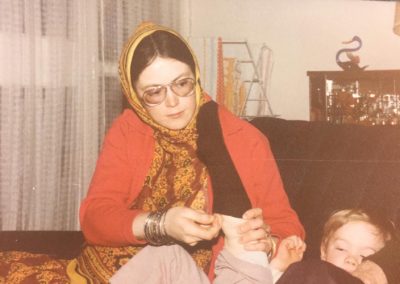