Served in the maintenance team at the manor and started prasadam distribution to the homeless at  Kentish town, Camden Town and Kings Cross. 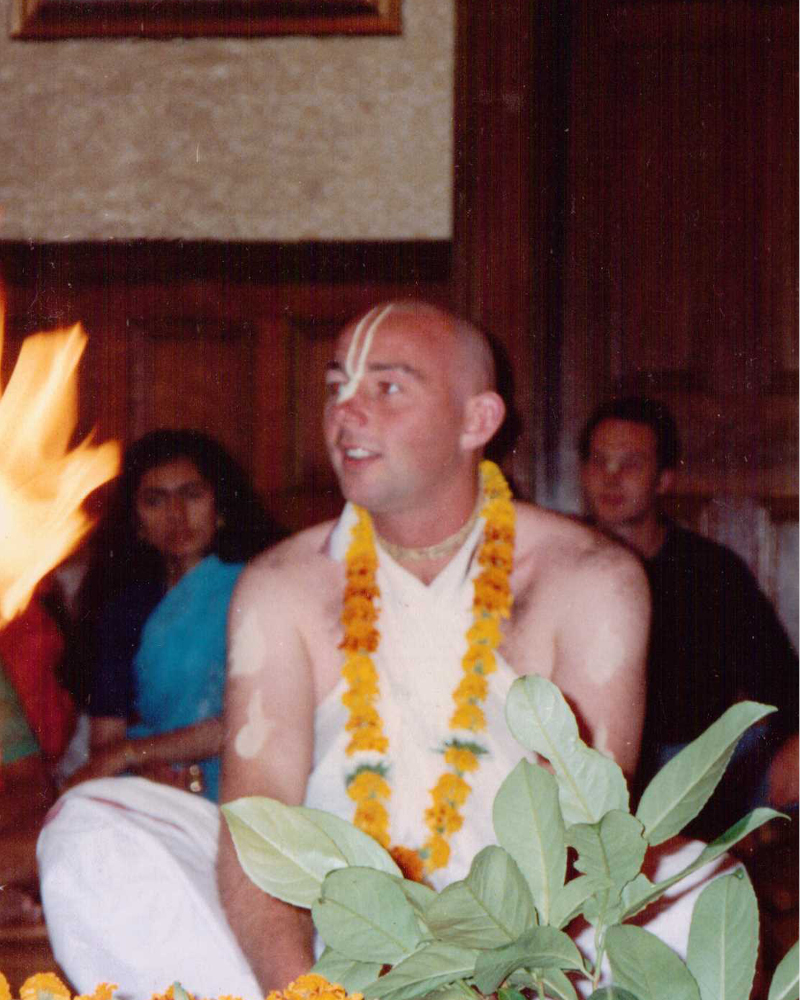 Ananta joined the Bhakta programme at Bhaktivedanta Manor in early 1987. He travelled by boat from Jersey to Southampton and then walked the rest of the way! He slept outside with only a blanket for clothing – this is how he arrived at the temple, like a dishevelled, unshaven, shoeless mendicant!

His main service was working with Mahavidya Prabhu in the maintenance department, but he was also a highly trained and very talented cabinet maker. At the request of Tribhuvanatha prabhu, he made the beautiful temple domes on the original Padayatra bullock cart housing the Padayatra Deities on Their travelling pilgrimage around the UK, Ireland and Europe. He also made a beautiful miniature bullock cart and designed and created the interior of a large van for the men’s travelling sankirtan party.

When he joined, Ananta was a fruitarian, but soon became a prasadarian, having such great faith in the purifying potency of prasadam.  This manifested in him, a great desire to distribute prasadam to the homeless and needy of London. At that time, 1991, the Food for Life program, previously run by Bhajahari prabhu, had stopped. Seeing an opportunity to take on this service, Ananta firstly, drove to London and established 3 points he felt would be suitable for prasadam distribution in Kentish town, Camden Town and Kings Cross. He then bought 2 very large insulated food containers and a small catering trailer from a donation given by his wife’s Grandparents. His Father-in-law designed a flyer that was widely distributed around London. Ananta would cook vast amounts of Kichari and Halava each day, hitch up the catering trailer to his car and drive to each area to distribute prasadam. Because of his enthusiasm and also his great sense of humour, Ananta endeared himself to the many people he served – one became a devotee at Bhaktivedanta Manor and many of the regulars became friends, learning about chanting and the philosophy of Krsna Consciousness. After a while, more devotees started to help with the cooking and prasadam distribution as the word spread about this wonderful meal being distributed freely.

In March 1992, Ananta went to Amsterdam to spend some time with his spiritual master. While there, he became ill and unable to eat. Ananta, very sadly, passed away suddenly on Lord Nrsinghadeva’s Apperance day during the Brahma Muhurta hour at the age of 27. At his funeral ceremony in Amsterdam, a huge bouquet and card was sent from the ‘Homeless of London’ who had made a collection to honour and remember him – Their card can be seen in the photos below.

(After Ananta’s passing, Doyal Baladeva prabhu looked after the Food for Life program for a short time before Parasurama prabhu took over, carrying on and expanding to the amazing service he does today). 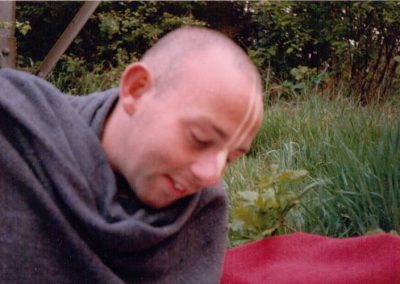 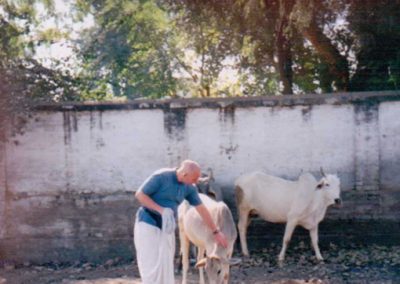 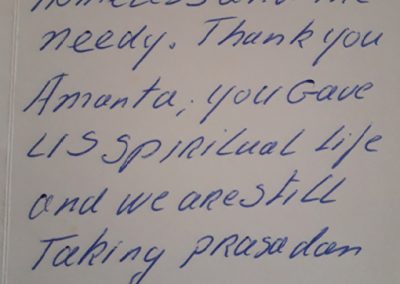 After Ananta passed away, the catering trailer he used was donated to Jamuna Jivana prabhu, (he had painted the ‘ Food for Life’ logo on the trailer for Ananta). Jamuna Jivana used the trailer to distribute prasadam in Glastonbury for many years afterwards.